Whoever Saves a Single Life...Rescuers of Jews During the Holocaust Exhibit

Whoever Saves a Single Life… Rescuers of Jews During the Holocaust showcases some of those rare – but exceedingly important – instances where people fought to safeguard their Jewish fellow citizens during the Holocaust. The exhibit includes a history of the Holocaust as well as panels on rescue networks, young rescuers, religious rescuers, and sections on Americans in Europe and the diplomatic corps.

During World War II, more than 27,000 Gentiles, referred to as the “Righteous Among the Nations” (Rescuers) did not stand by silently but at a time when hostility and indifference were the prevalent attitudes, stood up for what was right and compassionate. The Rescuers came from different nations, religions and walks of life and all shared eight honorable traits that allowed them to transcend obstacles, even danger, to protect their fellow humans.

Curated by the Jewish Foundation for the Righteous (JFR) and sponsored by Sarasota's Butterflies of Hope & Remembrance Project, the exhibit contains panels focused on the following topics/themes:

Teachers from Manatee and Sarasota public schools can enhance their knowledge of the role courageous people played in the Holocaust through a training on March 2, 2020 by Stanlee J. Stahl, Executive Vice President of the JFR.

One of the features of the exhibit is a series of posters displaying the eight “Traits That Transcend.”

Classroom copies (created by JFR) of these posters can be requested through Butterflies of Hope & Remembrance. The set conveys a message that the Righteous are not just heroes from the past, but also role models for the present. 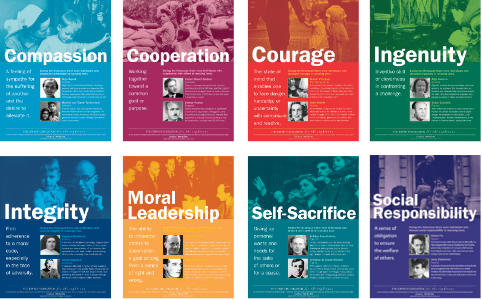 Exhibit sponsored by the Butterflies of Hope and Remembrance project, in collaboration with The Jewish Foundation for the Righteous, the Sarasota County Sarasota County Libraries & Historical Resources, Embracing Our Differences, Temple Beth Israel and The Jewish Federation of Sarasota-Manatee